Forming part of the traffic enhancement scheme of one-north, a road junction known as Portsdown Avenue Diamond Interchange was developed to link the newly constructed Mediapolis Flyover to Ayer Rajah Expressway (AYE) heading towards the city. Instead of plying through the minor roads within the estates, this new traffic scheme grants the vehicles a direct access to AYE and reduces the travelling time by up to 30 %.

The main scope of the work required the construction of two vehicular ramps connecting to the existing Portsdown Flyover. Several speedy construction techniques have been adopted to complete these ramps with a deck span of 8 m to 60 m in width and a headroom of 2 m to 7.5 m. These techniques included the deployment of system formwork for the erection of columns and overhang formwork system for the casting of deck beams and slabs across the slip roads.

Other aspects associated with the flyover, such as parapet wall, planter box, pedestrian walkway and M&E works, have also been completed. Some ancillary works like drainage works, paving works and relocation of bus shelter with new covered linkway have been concluded too.

While executing the project, public safety was of utmost priority as the works were carried out either alongside the ongoing traffic of expressway or spanning across the operational slip roads at all time. Meticulous planning with impeccable work sequencing were established and implemented with precision. Simultaneously, much emphasis was placed on ensuring the integrity of falsework. 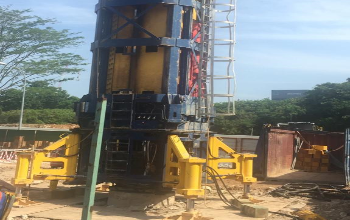 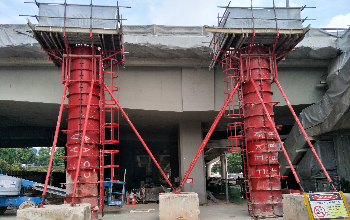 Adopting system formwork for the erection of flyover columns 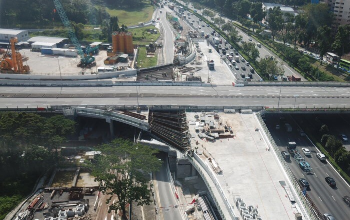 Aligning falsework with 9m-length H-beams, spanning over the slip roads

Staging temporary platform for the construction of flyover decks

Preparing for the casting of flyover decks

Painting of viaduct, fixing of irrigation and rainwater downpipe systems